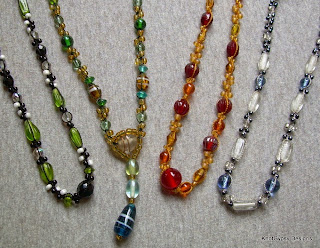 I belong to a micro macrame group on facebook.  Quite some time ago, new members asked for the more experienced knotters to show some photo of our early work.  I kept meaning to get around to taking the photos and posting them...but, I also kept forgetting or putting it off.  Since I plan on dismantling these necklaces and re-making them, I decided I better get a photo first.

Although, I still like the colors and the basic arrangement of the beads, I was never happy with the knotting cords around the outside of the focal beads.  They don't look like they are part of the design, they look "sloppy" to me.  It was this dissatisfaction that led to my practice of stringing the knotting cords through the focal beads along with the holding cords.  It is sometimes a challenge to do so as the holes in the focal beads can be a bit small for this.   Still, I think it "cleans" up the look.

When I made these necklaces, I had discovered Omega #2 nylon crochet thread.  Although it was way better than using cotton crochet thread, it has a tendency to "loosen up" over time.  I still use it for "Spiral Ropes" type designs because it makes them so flexible and supple, and I also make my knots tighter these days.  And, as I said, I pass both the knotting and holding cords through the focal beads.

If you take a look at my Original Waves Bracelet on my Free Downloads post, you will see how I put tassels even on bracelets with clasps (not just the ones with button closures).  At the time, I designed that bracelet, I was still using the Omega nylon crochet thread.  Because the crochet thread is not a bonded cord, the knots don't always hold tight.  This is fine within the body of a piece, but problematic (for me at least) at the end.  Ending with a ring (for a clasp) means the knot has to accommodate the ring.  Even using fabric glue was not sufficient as far as I am concerned.  I know, I tend to be overly cautious, but I want a piece of jewelry to LAST.  Ending with a tassel meant the end knots were overhand knots which hold much better since they don't have to accommodate the ring.  Since I have discovered C-lon Bead cord, this issue is no longer a problem and so I began to end pieces on a ring without the need for a tassel.

Email ThisBlogThis!Share to TwitterShare to FacebookShare to Pinterest
Labels: Hopefully Helpful Hints, It's all about the Journey, Spirals