I wanted to talk about Bead Fever. But I am having writer's block. Probably because I am currently in a lull between Fevers. So I decided to chit chat and see what happens. Sometimes dabbling in a creative process invites the muse to visit. So here goes: (If the muse does not show up, please forgive me for boring you.)

Bead Fever could just as easily be called Creative Fever, Hearing the Muse, etc. It is a term I use because I bead so much, but it is really that state of mind of being inspired both mentally and energetically. In fact, for me, I often suffer from depression (runs in my family) and as a result, have little energy. But when my muse visits, energy is not a problem. I tend to think of my muse as a dragon, burning hot. She rides me hard. I'll call her Scarlet after the red dragon in the "Wizard's First Rule" first of the Sword of Truth books by Terry Goodkind.

As I said, Scarlet rides me hard. When she is in residence, she does not want me to sleep (she runs design ideas nonstop through my head). I use herbal teas, yoga, and relaxation tapes to calm her down. I do need to sleep after all. But not necessarily at regular intervals. Oh well, we do the best we can.

Scarlet does not want to let me eat, too busy. Pretty good way to lose weight if one could count on it. So I make smoothies with good nutritious fruit, yogurt, etc; or other Quick Foods. (I do try to make healthy choices to keep up my strength - my unhealthy choices of chips, candy, etc come in my lulls because I get bored.)

Scarlet does not want to share attention with the other people I live with - my partner and our 8 cats. I am fortunate to have an understanding partner. The cats on the other hand are not so much. My partner tries to get by without me, gives me kisses, and scritches my back. (Hey, you don't have to be a cat to enjoy scritches!) The cats insist on being fed. Okay, I have to do this. I do love them after all. BUT they insist on Their scritches, and they want on my lap. Sometimes they want to help me bead. We have in common our love of string. This is challenging. 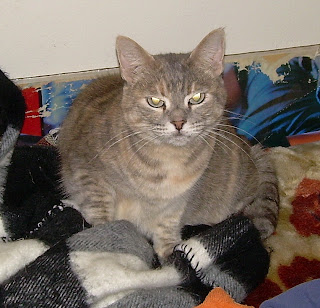 SIDETRACK: This is GiGi Beans, (born in 1998). My little tyrant. She yells at me when she thinks it is bedtime. In fact, she yells at me a lot. I don't understand what she keeps yelling about. Sometimes, I yell back. Mostly I try to ignore it, hoping it will go away.

BACK TO WHAT I WAS SAYING: I get very excited when Scarlet is here. I want to show off when something goes well and I have a new design. It's a good thing I now have this blog. My Partner is probably tired of me showing and telling him every little step I make. The cats never care unless they get to eat it. I don't bother with showing them.

SIDETRACK: On the left is Little Miss Princess Charming Bella de Trouble. AKA Ma Belle. She doesn't care, she doesn't have to, SHE'S MA BELLE. I know. It's a lot of name. She is a lot of cat. She was born in 1997 and is GiGi's mother. Bella has several gears of purr. There is nothing like lying down to sleep and having her purr in your ear. I wish I could market this. When we first moved here, she disappeared for 3 months. We looked every where. We even called our old neighbors in Austin, but they had not seen her. One day she showed back up as if nothing had ever happened. She did not look any worse for wear. Her fur was clean, she had not lost any weight. She won't tell us where she had been.

On the right is Momarella previously the cat know as Cinderella (she won't tell us her age). She was a stray in my neighborhood when we moved in. We noticed she was crippled. Then we noticed she was pregnant. We took pity and put food out for her. She would not let us touch her for a long time. When she gave birth in a box of junk on our porch, I made her up a nice clean box complete with blanket. She accepted it. (Yes, I have gotten rid of that box of junk, it was just detritus of our moving-in process.) We called her Cinderella because she was a stepcat, she lived on the steps. Finally my partner was able to pet her, we invited her in, she's been here ever since. She has become a lap leech. Her name changed to Momarella when she continued to groom her grown son, and everyone else. She keeps everyone clean. Our vet says, whatever made her crippled is too far in the past to fix. It would be more painful than beneficial. She gets around fine and holds her own with the other cats. Please don't worry.

BACK TO WHAT I WAS SAYING: Generally, right after one of Scarlet's visits, I have to just veg out. I have been vegging these past few days. Oh I have managed to cook dinner, feed and play with the cats, kiss my partner and give him the hugs he so richly deserves. I check into my Etsy shop every day. You know, the basics, not much else. 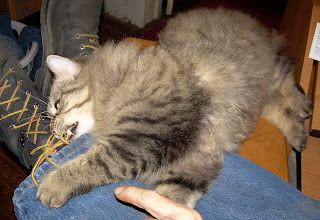 SIDETRACK: Here is Brutus McFluffy AKA Bubba (born August 2003). Mostly my partner's cat, Bubba is very sweet. He's not too bright, though. When he was a year old, he came home with a badly broken back leg. The vet had to put a pin in it. So of course we spoiled him. He got better, and when he was finally allowed back outside, he got attacked by a coyote. Luckily, no broken bones, just some shallow puncture wounds from the coyote's teeth. I had heard the commotion and looked outside to see the coyote with Bubba. I ran outside (with no thought of the pistol I keep on hand, or the bat by the front door), growling and yelling. The coyote dropped Bubba and ran. I don't know what I would have done if the coyote had challenged me. With the rage I was in, I would probably tried to rip the coyote apart.

Now, I love all animals, even the coyote. But Bubba is one of my babies. Mama Bear kicked in. He has recuperated from all this and loves my partner's feet and boots. 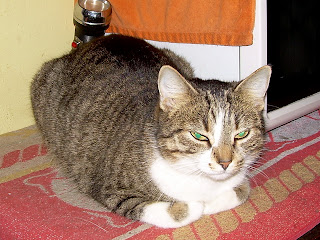 Magi Pi. AKA Magi the Tongue because she loves to lick. Bubba's mom. Magi is about 4 years old. I had enough cats. I told my friend I had enough cats. Her cat had had kittens. She was looking for homes for them. I TOLD her I did not need any more cats. She sent her husband to my house with this kitten. When I opened the door, I said "I don't want..." "Oh, how cute.......Do you want some food?" The kitten said yes. The next thing I knew, I was feeding her some of my homemade catfood. (based on the books: "Natural Cat Care" by Celeste Yarnall, PH.D and "Dr. Pitcairn's Complete Guide to Natural Health for Dogs & Cats" by Richard H. Pitcairn, D.V.M., PH.D. & Susan Hubble Pitcairn) She has been with us ever since.

As to the other cats, Taffemia (name from a Rudyard Kipling story meaning "Small person with bad manners who needs to get spanked, but probably won't because she's so cute") She is shy and it may take awhile to convince her to let me take her picture. I'll get pics of Puffy and Rorshack another time.

So here's hoping to lure Scarlet back into my life. I think I'm rested up.

Posted by KnotGypsy at 5:06 PM

Knotgypsy-Hey, thanks for your compliments on my blog... I would love it if you would link to me, you may or may not want me to link to you...mine gets read by lots of beady folks and you have some really original ideas that (maybe?) you don't want copied? You should think of publishing those crocheted earrings...most of the crochet I see is just ropes, those earrings are unusual. Have you crocheted with beads and wire?

I know some folks who use them and are quite happy...